A typical and funny conversation:

The organ might not ring a bell for some. Probably it was mentioned in passing during one of your science classes that it’s an ancillary organ. But there’s more to it than just being there.

The gallbladder is a small and steady organ found on the right side of your body, particularly, under your rib cage. It’s your liver’s neighbor. Now, when the liver produces bile it gets stored into the gallbladder. This bile (digestive fluid) then aids with fat digestion and absorption. Although the bile is in fact a healthy fluid in your body, the gallbladder still needs to empty out the bile in order for it to be healthy and to be able to function properly. If it fails to drain the content, the bile becomes overly concentrated and eventually form into crystal-like stones. Voilà! Gallbladder stones. They range in different sizes – from a grain of sand to as big as a peach; and you can have thousands of them too.

Will you have gallbladder stones?

My surgeon discussed this to me the day before I needed the emergency surgery. He said there is a high risk if you fall under the 3Fs : Female, Fat and Forty. That time I was only 27 years old and I weighed about 45 kg – the only factor was that I was female. So you might be wondering (just as he and my anesthesiologist did), how did that (gallbladder stones) happen?

My college and early working years diet consisted of high in fat (cholesterol) types of food – fatty cuts of meat particularly pork, fast and junk foods and regularly drinking beer. Erratically, I’d lose weight over short periods of time (from 63 kg to 49 kg) and then gain a few kilograms thereafter. I have to say, I really had an enjoyable diet during my early 20’s, yolo-ing through it (like normal yuppies do), but (if you knew me back then) it was obviously excessive. Gender also played a role in the fat department mainly because the female body normally produces estrogen.

So the factors would most likely be:

How do you know you have gallbladder stones?

It took a while for me to figure out that I had them. For a few days, I went in and out of the emergency room thinking that the stomach pain was undigested food or caused by some skipped meals. But the symptoms I had were clear as crystal:

I was in constant pain; not cramp-like. I’d describe it as a bloated one that couldn’t pass gas at all. My stomach felt like an inflatable balloon expanding time and again without any occurring deflations. I wanted to stay in a fetal position constantly and just really had a hard time moving around. There was this excruciating piercing pain at my back right side – causing difficulty in breathing. The pain was unpredictable and shifted from a good few minutes to around four hours.

Since I didn’t want to believe that I did have those stones, I was advised to get an abdominal ultrasound. If you do feel the same symptoms as I did, I would recommend for you to get one right away.

I got confined the 4th of March, 2012 and have not eaten since lunch time. I barely had any appetite because the pain just really loved to linger. At this point, the surgeon informed us that the gallstones have already blocked the duct where the bile normally moves and it was necessary to perform a medical emergency. He further explained that there was also a risk for the stones to get lodged outside of the duct – now who would want that to happen? I had no choice the surgery scheduled as soon as possible (the next day in the afternoon). Until then, I had to go through fasting.

After the successful extraction and release from the hospital,  I took a two-week leave from work just so I can settle back at home with my three new punctured stomach wounds.  Although the bloating pain was gone,  the first few days were extremely tough. I couldn’t lay flat on the bed and cried whenever my abdomen contracted (coughing and even laughing!). I had to sleep-sit 45 degrees just so my stomach wouldn’t feel so stretched as it felt like someone punched through my entire right abdomen, squeezed all of my guts out and shoved it back in.

My meals were sad watered-down oatmeal, yogurt drinks and flavored gelatin. It took a few months for me to get back on my feet (and high heels!).

Oh, I thought. If only I lived a healthier life then, probably this wouldn’t have happened. But this was it. After the surgery I told myself, “This is the last straw, I can’t be unhealthy anymore. It’s not too late.”

Moving forward through the years

Honestly, my commitment of having this healthy lifestyle solidified through the years. I’m not ashamed to tell the world that it’s just who I am now (though I get teased a lot for always ordering salads). Maintaining a high-fiber diet (in moderation) for six years and being active is a routine that I so happily spend each and every day (approximately 2,190 days!). There are times when I am still saddened by the loss of my gallbladder (though it’s a small organ, I can be a bit of a sentiment) : the effect of losing it (possible liver damage?) and the fear that comes along with it will always haunt me. But, reality bites hard and it is changes who you are – you either accept it wholeheartedly or you don’t. I did. It was a wake up call that blissfully happened sooner than later. That was the beauty of it! I became more aware of my body, more attentive to its needs and what was truly essential to make myself well-rounded.

Whenever I’m asked what would I advise people? I always tell them – embrace the healthy life. Because as Jim Rohn goes, “Take care of your body. It’s the only place you have to live.”, you have to listen and pay attention to yours. Do not wait for it to give up on you as prevention will always be better than cure.

Now, Healthy no longer meant losing weight, gaining muscles, burning fats or even looking sexy (like how some women see healthy). To me, it means a way of living in a balanced order and enjoying your life in tip-top shape one day at a time. This is why I started writing, to be able to share the wonderful experiences in choosing and dedicating to live a healthy life.

What are your life-changing healthy stories? Tell me all about it.

Photos were taken from the internet: POPxo, MedicineNet, The Awkward Yeti, Fabulous Nishpal and Mayo Clinic. The gallbladder stone (in a jar) was taken by my brother, Magic Liwanag.

One thought on “Goodbye, gallbladder! Hello, a newer me.”

Body weight exercise to prep you for your endurance #WOD tomorrow ❤️ All you need is an open space, workout clothes and your motivational mindset 😎 Focus on your form for each repetition to get the most out of your workout 🏋🏽‍♀️ As always don’t forget to stretch and cool down after ❄️
Good morning! Today is a good day. ❤️ Make today so awesome, yesterday gets jealous. Let start this week right with love and positivity. 🌺
Sundays were always gymnastics training days. I can’t wait for all this to be over and go back to training. Until then I can just keep conditioning. ❤️ (Last video was my first time doing ropes without legs) Happy Easter Sunday everyone! 🙏🏼
Didnt get to join last week? 😊 No worries! I’ll be on Fitness Lockdown PH’s Facebook account at 3 PM tomorrow for a LIVE Sunday #quarantone weekend workout ⭐️ See you there! 😎 #strongertogether #fitnesslockdownph 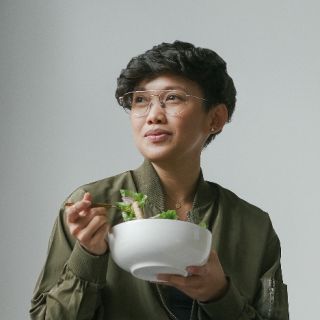 I am a confit that features unforgettable life journeys as my principal ingredient. My sugar confectionery includes healthy adventures, unpublished artworks, kissing the French language and hourly food cravings. Yes, I'm all sugar and spice - coated and glazed with bittersweet and sprightly experiences.